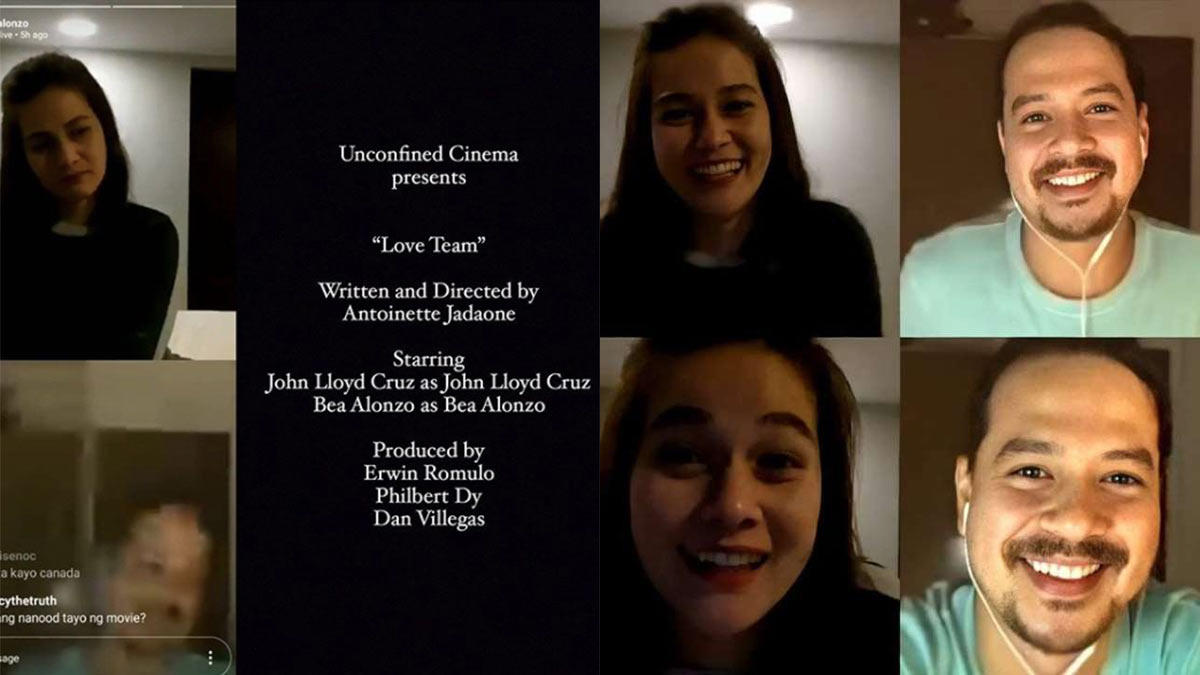 Last Monday night, social media was rosy and on full blush as John Lloyd Cruz and Bea Alonzo put on a show over their IG Live session.

Fans and viewers couldn’t help but reminisce how these two actors seemed so fitting for each other and their right off the bat on-screen chemistry was just undeniable. Those who have watched the IG live session threw some speculations that Alonzo and Cruz might really be getting along and rekindling the fire that has gotten out for a long time. The two even treated their viewers when they reenacted some of the memorable and poignant scenes from their movie One More Chance.

She loved me at my worst,
You had me at my best,
I just a made a choice
And you chose to break my heart

However, last Wednesday, another surprise came from the pair with directors Antoinette Jadaone and Dan Villegas as they revealed that John Lloyd and Bea’s IG Live interaction is actually an experimental film.

“Love Team is a love story—whether romantic or in its other forms—told entirely within Instagram. It is a story of our times. Love stories have always had their place in Filipino cinema, and we wanted to bring the feeling that those movies inspire to a platform that has become more relevant and utilized in this time of quarantine—social media, specifically Instagram. The use of social media creates all sorts of new possibilities for storytelling. This was a story told over two weeks, adapting and evolving to real-life events, integrating our genuine sentiments over the state that we’re in,” Jadaone shares. “The Unconfined Cinema invites filmmakers and artists to join us in exploring the possibilities of our cinema. Not just on Instagram, but on every stage imaginable.” she ended.

Everyone was at awe upon hearing the big news and this big reveal is just a major proof on how good and talented these people are. We all kinda hoped that the IG live interaction was real, though.

follow me:
Nikki Viola
Nikki is a TV/ events host and courtside reporter. She is into performing arts and writing. She enjoys binge-watching series and movies,plus she's fond of listening to music in her spare time.

follow me:
Latest posts by Nikki Viola (see all)